When the Truth and Reconciliation Commission (TRC) handed its Final Report to then President Nelson Mandela in 2003, it also referred a list of several hundred cases to the National Prosecuting Authority (NPA) for further investigation and prosecution. These cases involved incidents of gross human rights violations including murder, torture, enforced disappearance, kidnapping, and unlawful detention, in which no or only partial amnesty was granted by the Amnesty Committee of the TRC. The compact made with victims by the democratic government required that these cases be duly investigated and prosecuted. However, the process has been severely hampered due to political interference in the NPA. Recently, the National Director of Public Prosecutions (NDPP), Adv Shamila Batohi, reassured victims and South Africans in general that her office was looking afresh into the TRC cases.

This website serves as a repository of information on the progress made in these cases. The Foundation for Human Rights (FHR) will be continuously adding further apartheid-era crimes to this website, as-and-when they are ready for investigation. Initially, the focus will be on cases arising from the TRC process, but other apartheid-era cases may also be added. TRC cases that will shortly appear on our website include: 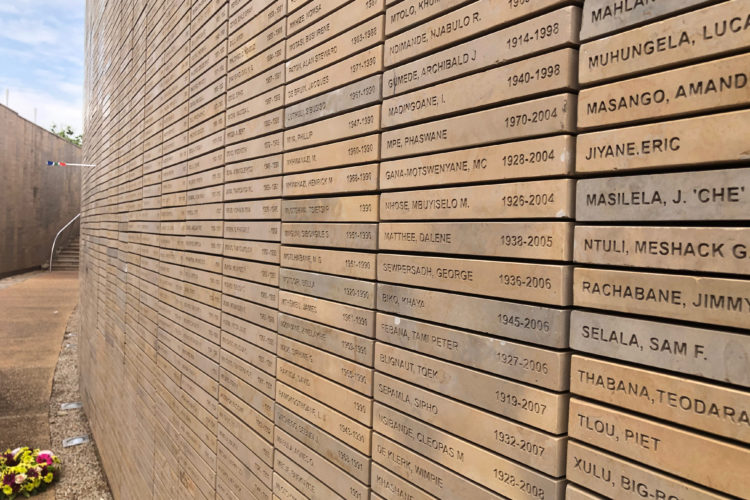 This case relates to the disappearance and murder of the ‘PEBCO Three’, namely: Sipho Charles Hashe, Qaqawuli Godolozi and Champion Galela, who were leaders of the Blacks Civics Organisation (PEBCO). This organisation was affiliated with the United Democratic Front (UDM), which in turn was aligned to the African National Congress (ANC), both banned organisations during apartheid. The three men were abducted at Port Elizabeth airport on 8 May 1985 and subsequently murdered near Cradock on a farm known as Post Chalmers. The TRC granted amnesty to Harold Snyman and Kimani Peter Mogoai for conspiring and ordering the abduction and murder, however, other perpetrators implicated in the case were refused amnesty.

In 2004, Gideon Nieuwoudt (who died a year later), Johannes Martin van Zyl, and Johannes Koole were charged with the abduction, assault, and murder of the PEBCO Three. This was the first case that the Priority Crimes Litigation Unit (PCLU) of the NPA had pursued in respect of perpetrators who had been refused amnesty. However, shortly after their bail hearings in 2004, Nieuwoudt and van Zyl applied to the High Court for a review of the Amnesty Committee’s decision. The Court ruled that another amnesty committee should be convened to rehear the application. As a result, the case was provisionally withdrawn against the security police officers. The NPA submitted that the prosecution could not proceed pending the amnesty decision. The amnesty committee was never reconvened, and the case has effectively stalled.

Caiphus Nyoka was a student activist and a member of the Congress of South African Students (COSAS). On 24 August 1987, he was shot dead in the early hours of the morning at his home in Daveyton. His murder had followed frequent police raids on his family home in the preceding months. At the time of his death, the policemen responsible claimed that they had shot him in self-defence. Nyoku had been shot 12 times. An inquest into his death was held in October 1988. This inquest court ruled that the police had in fact acted in self-defence, despite family members asserting that Nyoka did not have a weapon. Nyoka’s sister, Alegria Nyoka appeared before the TRC in 1997 demanding an investigation into his killing. In late 2019, former security branch officer, Johan Marais, confessed to a Rapport journalist that he had killed Nyoka in cold blood more than 30 years ago.

Murder of the COSAS 3 and injury of Zandisile Musi

Eustice ‘Bimbo’ Madikela, Ntshingo Mataboge, Fanyana Nhlapo (collectively known as the COSAS 3) and Zandisile Musi were members of the Congress of South African Students (COSAS), an organisation associated with the then banned African National Congress (ANC).

Tlhomedi Ephraim Mfalapitsa was a former member of Umkhonto weSizwe (MK), the military branch of the ANC. However, he later became a Security Branch officer in the South African Police (SAP), turning ‘askari’. Before his defection from the ANC, Mfalapitsa had enjoyed a close relationship with Musi’s brothers, who had served with him in MK, while the men were in exile. After Mfalapitsa joined the SAP, he established contact with Musi. The latter explored the possibility of leaving the country with Mfalapitsa, whom he erroneously believed to be a member of MK.

Mfalapitsa reported their discussions to his superiors, who ordered him to lure Musi and the others to a pump house at a mine near Krugersdorp, under the guise of giving them military training. On or about 15 February 1987, Madikela, Mataboge, and Nhlapo were killed, and Musi was seriously injured in an explosion. The incident occurred under circumstances aimed at creating the false impression that the men had accidentally blown themselves up while undergoing military training. Five alleged perpetrators applied for amnesty from the Amnesty Committee of the Truth and Reconciliation Commission (TRC), but were refused amnesty for the charges of murder and grievous bodily harm.

This case concerns the murder on 1 March 1991 of Adriaano Louis Bambo, an informer who had worked for the Security Police. Bambo had been implicated in acts of armed robbery and was on the point of disclosing sensitive information about the Security Police and their activities. At the time of his death, he was no longer a member of the police force. Eugen De Kock, the Operational Commander of ‘Vlakplaas’, the South African Security Police Special Unit, disclosed before the Truth and Reconciliation Commission (TRC) Amnesty Committee that, in compliance with his superior’s order (referring to Krappies Engelbrecht), he had instructed members of his Vlakplaas to create a false cache of weapons in order to frame Bambo. The plan involved taking Bambo to the place where the cache was located, and then shooting him there under the pretext that he had tried to escape. Subsequently, Bambo was murdered in Nelspruit, as planned. De Kock, Dawid ‘Duiwel’ Brits and Daniel Lionel Snyman applied for amnesty before the Amnesty Committee, which was granted. However, a number of other individuals implicated in Bambo’s murder have never applied for amnesty.

On 1 May 1993 masked gunmen attacked the Highgate Hotel outside East London with automatic rifles and hand grenades. On the day, Deric Whitfield, Stan Hacking, Deon Wayne Harris, Dave Wheeler, and Douglas Gates were killed, and seven others were injured. Initially, it was suspected that the military wing of the Azanian People’s Liberation Army (APLA) had conducted the attack, especially as it had claimed responsibility for other attacks earlier, including on the Queenstown Spur, Fort Beaufort’s Yellowwood Hotel and the King Williamstown Golf Club. However, the APLA publicly refuted responsibility for the Highgate attack, and did not apply for amnesty before the Truth and Reconciliation Commission (TRC) Amnesty Committee. Moreover, evidence suggests that the modus operandi used during the attack was inconsistent with the APLA’s.

Welcome Khanyile was a member of the Inkatha Freedom Party (IFP), then a banned organisation. Khanyile died during an interrogation by members of the South African Police at or near Heidelberg, in the former Transvaal, during August 1992. After being detained for suspicion of murder, he was interrogated and likely tortured in the back seat of a taxi. Khanyile allegedly died during this interrogation. The Security Branch covered up the murder by disposing of the body, which was then blown up with explosives. The police gave the impression that Khanyile had blown himself up accidentally. No one applied for amnesty in this matter.

Ramatha Nicholas ‘Boytjie’ Thlapi was suspected of being an anti-apartheid activist. Together with a friend, he was arrested on 20 March 1986, at Stilfontein in the North West Province – formerly known as the Western Transvaal – and detained under Section 29 of the Internal Security Act. He was presumably tortured, then murdered, and his body was disposed of. Since his disappearance, his family has been continuously searching for the truth concerning his whereabouts. Thlapi’s father, James Barileng Thlapi, testified before the Truth and Reconciliation Commission (TRC) Human Rights Violations Committee on 29 September 1989. To date, neither Thlapi nor his remains have been found.

The available information indicates that Ignatius ‘Iggy’ Mthebule was a student activist associated with the then banned Azanian Student Organisation (AZASO) in 1975. Samuel Mthebule, Iggy Mthebule’s brother, testified before the Truth and Reconciliation Commission (TRC) that Iggy had been expelled from university in 1976, and had gone into exile in about 1981. He then allegedly returned to South Africa and became an underground African National Congress (ANC) operative in Johannesburg. The ANC was also a banned organisation at the time. In 1987, Mthebule’s unit was allegedly infiltrated by apartheid agent Joy Harden, who lured him to a restaurant in Hillbrow and identified him to the Security Branch of the South African Police as an underground operative. It was the last time Mthebule would be seen alive. To date his whereabouts remain unknown.

Matthews Mabelane was arrested and detained by the Security Branch at Zeerust while attempting to leave South Africa for Botswana. In January 1977, Matthews’ parents were informed by the police that he had been detained at John Vorster Square. On 16 February, they were further informed that their son had fallen from the 10th floor, following 23 days of detention. The police claimed that he had jumped out of the window during the interrogation. Magistrate Dormehl, who presided over the inquest into Mabelane’s death in 1977, found that his death was accidental and that no one was to blame.

Peter Thabuleka was a known Umkhonto weSizwe (MK) operative in Mamelodi. The MK was the armed branch of the then banned African National Congress (ANC). In 1988, during a South African Police (SAP) operation in Mamelodi, Thabuleka was mistaken for another MK operative, ‘Bomber’. Thabuleka was kidnapped and taken to police headquarters.  During his interrogation, Thabuleka was tortured to obtain information on the whereabouts of other MK members. His whereabouts has never been revealed.

Ntombikayise Khubeka was a member of the then banned African National Congress (ANC) and an operative responsible for coordinating between the internal and external units of the ANC, as well as other underground activities. The Security Branch regarded her as a senior ANC member and the leader of the KwaMashu ANC cell. She was befriended by two askaris (former ANC members turned police) from Vlakplaas. Having gained her trust, these askaris lured her to the Durban Beach Front, where she was kidnapped by the Port Natal Security Branch. She was driven to the Winkelspruit Army Shooting Range, interrogated, and tortured. She allegedly died during the interrogation, and the Security Branch dumped her body in the vicinity of her home in Bhambhai, north of Durban.

Nicodemus Kgoathe was a supporter of the then banned Pan African Congress (PAC). He was arrested in 1968 with 17 others while protesting against the appointment of a new headman. He was detained under the Terrorism Act for 180 days without trial at Silverton police station, in Pretoria. On 4 February 1969, he died as a result of torture by members of the Security Police. The police claimed that Kgoathe had slipped on a bar of soap. The magistrate presiding over the inquest, CG Jordan, found that he was unable to conclude who was responsible for Kgoathe’s death, based on the available evidence.