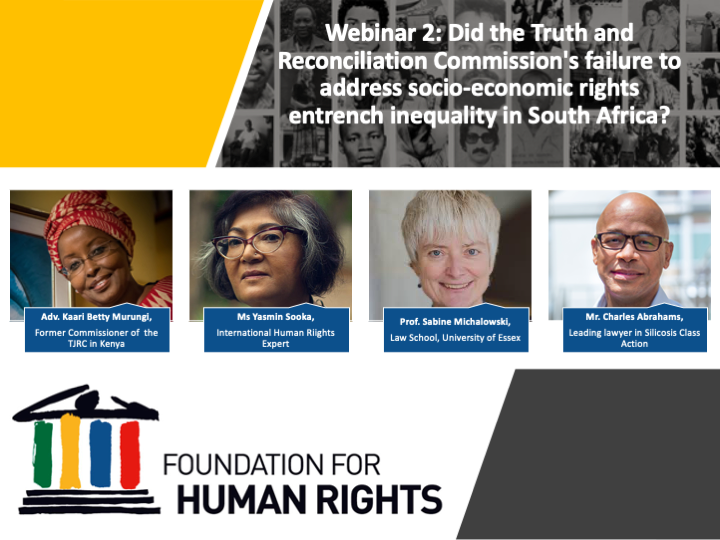 “There is always space for truth telling.”

These are the words of international human rights expert and former vice chairperson of the Truth, Justice and Reconciliation Commission of Kenya (TJRC) Kaari Betty Murungi speaking as one of the panelists at the second webinar on the Unfinished Business of the Truth and Reconciliation Commission (TRC), hosted by the Foundation for Human Rights (FHR). The focus of the webinar was to interrogate whether the failure to address socio-economic rights by the TRC in South Africa further entrenched inequality. Other panelists included, Charles Abrahams, a human rights lawyer who has represented workers across the continent in litigation against multinational corporations accused of gross human rights violations; Yasmin Sooka, former commissioner on the TRC in South Africa and current chair of the United Nations Commission on Human Rights in South Sudan; and Sabine Michalowski, professor of law at the University of Essex and co-director of the Essex Transitional Justice Network.

The webinar, chaired by the executive director of FHR, Hanif Vally, focused on how the concept of transitional justice can be understood within the broader context of socio-economic rights in order to address the country’s persisting socioeconomic inequalities. Ms Sooka touched upon the importance of time and context with regards to what determines the conditions of transitional justice as “today, economic crimes are seen very much as part of the transitional justice agenda”. Ms Sooka pointed out that, TRC’s focus on civil and political rights was heavily influenced by Latin American and other experts from the global north who at the time, had experiences in transitioning military or totalitarian regimes into democratic ones. As a result, more emphasis was placed on the need to address violent atrocities such as, massacres, disappearances and tortures. Discussions within the TRC in South Africa regarding socio-economic rights and structural inequalities did take place, but as Ms Sooka suggested, even with the subsequent efforts of former commissioners and civil society, the international community remains nervous regarding issues of redress and these debates still rage on today.

Professor Michalowski addressed the questions regarding why at international level more emphasis was placed on civil and political rights and how transitional justice has become part of the international discourse. She spoke about her work on the transitional justice processes in Colombia, in particular, her experiences with the Special Jurisdiction for Peace. In this regard, she stressed that many mechanisms of transitional justice in Colombia including criminal sanctions, are based on restorative justice and focus on victims’ participation. Professor Michalowski further noted that, South Africa’s TRC is still viewed as a point of reference at international level, and also suggested that the truth commission’s investigating the causes of mass atrocities is “a huge achievement in itself”. In addition, Professor Michalowski noted that the TRC in South Africa was reflective of a number of limitations in truth commissions and stressed that a strong political will to implement recommendations is critical for the success of truth commissions.

Similarly, Ms Murungi referred to the challenges in implementing truth commissions’ recommendations. This was the case with the TJRC in Kenya and previous judicial commissions whose recommendations have not been adopted or implemented. Ms Murungi further spoke about how the TJRC in particular, observed a link between economic crimes occurring at the same time as crimes that violate political and civil rights. The difficulties for the TJRC, Ms Murungi asserted, came from defining the scope of the mandate of the commission, the acquisition of statistical data on economic marginalization, and, defining what exactly constituted an economic crime.

Mr Abrahams observed that the minimalist approach of the TRC in South Africa should be understood against other developments that had been happening outside the TRC Act, in particular at the level of policy and law (e.g., the Reconstruction and Development Programme). Mr Abrahams noted that even though the TRC Act mandated the commission to look at the context in which the violations took place (institutional and structural underpinnings of apartheid), the commission chose to focus its operations on civil and political rights. At the same time, Mr Abrahams noted that the TRC’s institutional hearings “have sufficiently laid down the structural foundation without which apartheid could have not existed.” The institutional hearings and findings by the TRC have given an impetus for litigation against multinationals and banks, who thrived on sourcing cheap labour from the migrant labour system. Although they have realized some success in this regard, Mr Abrahams was quick to point out that it was “not as much as they had hoped” and that “litigation should be seen in the same context as the unfinished business of the TRC in South Africa”.

The FHR’s webinar series is part of a broader campaign to address the crisis in morality and impunity in South Africa. This is built on the many injustices which have not been addressed or redressed by South Africa’s democratic government, despite over 25 years since apartheid. The FHR has created a new website dedicated to documenting and monitoring these cases and the ongoing efforts to reach justice for apartheid’s victims and survivors.

For more information on the FHR’s Programme on the Unfinished Business of the TRC, consult our website or contact us at TRCunfinished@fhr.org.za.

Chido Muzanenhamo is a junior research consultant at the Foundation for Human Rights and a PhD candidate in the South African Research Chair of Spatial Analysis and City Planning at the University of the Witwatersrand. Chido has a Master’s in Development Studies from the University of the Witwatersrand. Her Master’s research report entitled: ‘Space, Agency and Informality: A case study of Musina’s food vendors and foreign currency dealers’ was awarded First Prize for a Master’s research report in the School of Social Sciences.

The recording (webinar 2) can also be accessed below:

To learn more about webinar 1 and to access the recording form webinar 1 consult: https://unfinishedtrc.co.za/fhrs-new-webinar-series-justice-delayed-is-justice-denied/