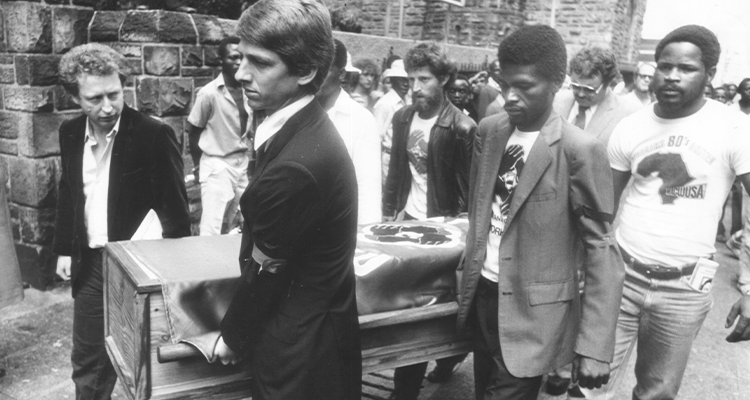 Naledi Shange reports on the re-opening of the Aggett inquest.

“It’s quite a lonely place to be, standing in a witness box with a judge next to you and some fairly careful cross-examination by the advocates, in front of a gallery full of people who are hanging on your every word,” said Jill Burger – the sister of late Dr Aggett, who has already given testimony in the reopened inquest.”

“The Foundation for Human Rights (FHR), which has been supporting the legal challenge on behalf of Aggett’s family, said ahead of the resumption of the current inquest, that in December the minister of justice had made a unilateral decision to tack the inquest case of Ernest Moabi Dipale on to that of Aggett.”

Security branch officer describes ‘cordial’ interrogation of Neil Aggett – By Naledi Shange, 19 January 2021 “Naude said interrogation was simply a process or conversation that unfolded until the required information was obtained.”

“A former member of the apartheid security branch, who interrogated anti-apartheid activist Dr. Neil Aggett has offered an apology to Aggett’s family and those detained under apartheid.”

“Naude also told the court he believed that if he had been allowed to continue his interrogation with Aggett, he would have been able to get the kind of statement from Aggett that would have been enough for Aggett to be considered part of the “white left”, but not a treason plotter. “He would be alive today, I’m convinced of it,” he said.”

Looking back now, Naude admitted that it was possible he had been sent to see Floyd as a means of getting him out of the way so that the more intense and brutal period of Aggett’s interrogation by Whitehead could commence. He told Makume he believes that “if they granted me the opportunity to complete my statement, Dr Aggett would be alive today”

“I remember when the notorious Gideon Nieuwoudt came for me. I was expecting them because the Security Police had set a trap for us. So when he knocked, I recognised the tall, freckled monster who had interrogated Steve Biko three years before and beaten him so badly that he died. He politely asked if I was David Forbes. I replied: “You know who I am.””

Neil Aggett told me how he was tortured, says former police officer, By Ufrieda Ho, 24 January 2021

‘I had nothing to do with it’: State security cop unmoved by Neil Aggett’s death – By Naledi Shange, 26 January 2021

“Woensdregt said Aggett committed suicide five days after he and another officer, Nick Deetlefs, interrogated him, but Woensdregt minimised his role in the interrogation, saying he had been in and out of the room.”

““You were called ‘makhulu sergeant’ and ‘yster man’,” he put it to Woensdregt about being the “big-man sergeant” and the “iron man” and read back affidavit text to him in which Woensdregt was impressed with himself in having outfoxed questioning by the late advocate George Bizos in the first inquest into Aggett’s death in 1982.”

“Woensdrecht repeated adamantly that the many, often horrific incidents in his application for medical release from duty were confidential and included only so a psychologist could assess if he was suffering from post-traumatic stress disorder. He said they should not be used to contradict his claims that his interrogation of Aggett or any other detainee was conducted professionally and within the letter of the law.”

The Talking Point – Justice for families of victims of apartheid victims

As you’ve just heard the names of those who died in police custody being called out and the official reasons given by the then apartheid. This list is from 1963 up to 1987.