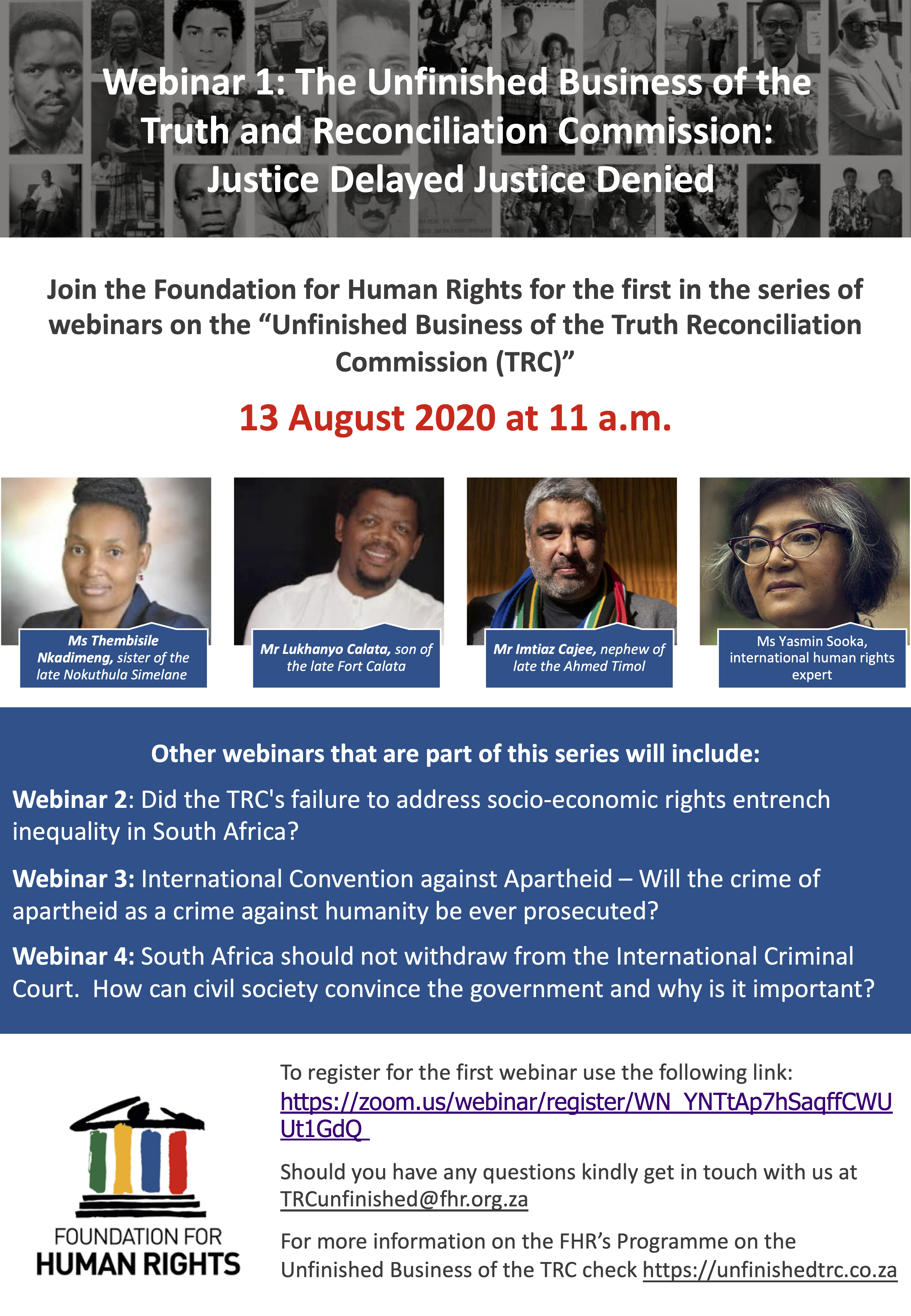 The Foundation for Human Rights (FHR) was established in 1996 by then President of South Africa, President Nelson Mandela, and the European Union (EU), to address the legacy of apartheid, support South Africa’s transition to democracy, and build a culture of human rights in the new democracy. Since its inception, the FHR has been involved in keeping the legacy of the Truth and Reconciliation Commission (TRC) in South Africa alive.

The constitutional and statutory design of the amnesty process in South Africa specifically envisaged that criminal investigations, and where appropriate, prosecutions, would take place where perpetrators of apartheid-era crimes were refused amnesty or failed to apply for amnesty. However, more than twenty years into democracy, the victims of gross human rights violations and their families are still waiting for justice and closure, while perpetrators and beneficiaries of apartheid enjoy their comfortable lives.

During the webinar we will speak about the delay in investigations and prosecutions of gross human rights violations committed during apartheid, and how it has prejudiced the rights of victims and their families to justice and accountability. The prosecutions in the matter of enforced disappearance of Nokuthula Simelane and recent reopened inquests into the deaths in detention of anti-apartheid activists such as Ahmed Timol and Neil Aggett have brought into the spotlight information on how both the South African Police Services (SAPS) and the National Prosecuting Authority (NPA) colluded with political forces ostensibly at the highest level, to ensure the deliberate suppression of investigations and prosecutions of TRC apartheid era cases. This coupled with the attempts by the Executive to grant administrative pardons to the perpetrators of apartheid-era crimes as well as administratively expunge their crimes and the failure by the Government to fully implement reparations recommended by TRC, have left the victims feeling betrayed, traumatized and with little hope for justice.

The webinar will include a panel discussion and a Q&A session, and is open to the public, press and other interested parties. The panel will include the families of apartheid-era victims who have been engaged in a continued struggle for justice for their loved ones. We will also host Ms Yasmin Sooka, who is a former Commissioner of the TRC in South Africa, and who has been actively engaged in a struggle for criminal accountability in South Africa and beyond. The webinar will be chaired by the FHR’s Executive Director Hanif Vally and the panel will include:

Should you require technical support with registration or with joining the webinar, kindly get in touch with out IT support at WebinarITsupport@fhr.org.za

Should require more information on the FHR’s Programme on the Unfinished Business of the Truth and Reconciliation Commission, kindly consult our website https://www.unfinishedtrc.co.za or contact us at TRCunfinished@fhr.org.za .

Other webinars that are part of this series will include:

Webinar 3: International Convention against Apartheid – Will the crime of apartheid as a crime against humanity be ever prosecuted?

Webinar 4: South Africa should not withdraw from the International Criminal Court.  How can civil society convince the government and why is it important?

The Foundation was established as one of the key instruments of the transition by the Government of South Africa (former President Mandela himself signed the agreement) and the European Union in 1996 to address past violations, establish a human rights culture and promote the new Constitution. Since 1996, the FHR’s mission has been to address inequality and promote and entrench human rights values as enshrined in the South African Constitution by direct funding to civil society organisations. Since its inception, one of the FHR’s major portfolios has been built around accountability for gross human rights violations committed during the apartheid period. The FHR’s responsibilities within this programme include coordinating the efforts of various parties seeking justice for the victims of apartheid; funding and overseeing the investigations and prosecution of apartheid-era crimes; and supporting the South African Coalition for Transitional Justice in their quest for truth, reparations, and criminal accountability for human rights violations during apartheid. FHR’s interventions, under the Unfinished Business of the TRC Programme, are aimed at ensuring criminal accountability but also supporting the truth processes by piercing the cloak of secrecy surrounding the activities of the then Security Branch of the South African Police and the state.

Among others, the FHR has been engaged in the following initiatives: