Local News
Webinar 3: International Convention against Apartheid – Will the crime of apartheid as a crime against humanity ever be prosecuted? 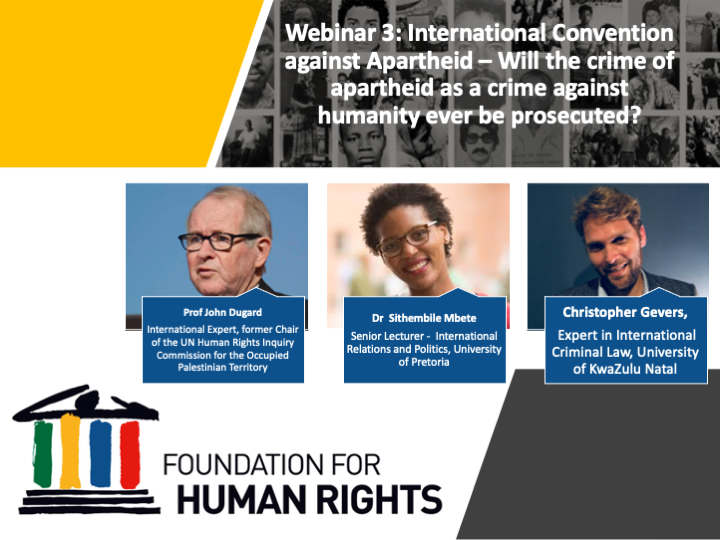 By Chido Muzanenhamo, junior research consultant at the Foundation for Human Rights

The third of a series of webinars on the Unfinished Business of the Truth and Reconciliation Commission (TRC) hosted by the Foundation for Human Rights (FHR) focused on the question of whether the crime of apartheid as a crime against humanity will ever be prosecuted. The webinar was moderated by Ms Yasmin Sooka, former commissioner of truth commissions in South Africa and Sierra Leone, and current chair of the United Nations Commission on Human Rights in South Sudan. Serving as panelists were Professor John Dugard, a renowned expert of international law, former Chair of the UN Human Rights Inquiry Commission to Investigate Violations of Human Rights and Humanitarian Law in the Occupied Palestinian Territory and Special Rapporteur to the United Nations on the topic; Mr Christopher Gevers who is an international criminal law expert and lecturer at the University of KwaZulu-Natal; and Dr Sithembile Mbete who lectures in international relations and South African politics in the department of political science at the University of Pretoria and is an associate fellow in the university’s Centre of Governance and Innovation.

A large aspect of the webinar dealt with what the International Convention on the Suppression and Punishment of the Crime of Apartheid (hereinafter “Apartheid Convention”) is, as well as its importance today. Prof Dugard provided a historical background that addressed the role of the United Nations between 1950 and 1970 in providing recommendations and condemning the practices of apartheid. “These efforts were insufficient for the international community who wanted to go further to delegitimize apartheid more completely and also to provide for some mechanism to prosecute the crimes of apartheid”. The 1973 Apartheid Convention thus emerged, calling for the suppression and punishment of crimes of apartheid, labelling it a crime against humanity which therefore delegitimised it and declared that any conduct amounting to apartheid should be condemned globally and universally as it is directed against humanity as a whole, and therefore, must be prosecuted by State Parties. Prof Dugard noted however, that “no prosecutions ever took place and I think it is largely due to the fact that no western European state ever became a Party to the convention, [even today].”

It is the opinion of Prof Dugard that at the attainment of democracy in 1994, South Africa should have become a State Party to the Apartheid Convention, which has become an important symbolic instrument. He emphasised that the 1990s made the International Criminal Court (ICC) a reality and apartheid as a crime against humanity has been further reaffirmed in the 1998 Rome Statute. In 2002, the Roman Statute was incorporated into South African law through the enactment of the Implementation of the Rome Statute of the International Criminal Court Act 27 of 2002, yet as Prof Dugard pointed out, there have been no charges of crimes of apartheid ever brought since the domestication of the Rome Statute [the latter is concerned with international crimes committed on or after 1 July 2020]. South Africa is now in the process of ratifying the Apartheid Convention which comes with the advantage of defining the crime of apartheid more broadly in that it “embraces all aspects of apartheid”; in a way it is a more descriptive account of the crime of apartheid,in comparison to the Rome Statute which is “very narrow”. Prof Dugard also mentioned the debates surrounding “apartheid as a crime committed under international customary law” which have not remained unchallenged. Regardless, Prof Dugard hopes the ratification of the Apartheid Convention will allow it to be used “as an educational tool in South African schools as it has a great educational and symbolic value”.

Prof Dugard further pointed out that the Apartheid Convention is not only significant for South Africa but also for other countries that practice apartheid because “the Convention makes it clear that it is not confined to South Africa alone. It describes the offences on the basis of apartheid as it was practiced in South Africa, but it is intended as an international crime.” In this context, Prof Dugard spoke about the situation in the Occupied Palestinian Territories, where Israel has been accused of practicing apartheid. In relation to this issue, Prof Dugard observed that Palestine has sought remedies through two international channels, including before the Committee on the Elimination of All Forms of Racial Discrimination and before the ICC, which is the only international mechanism concerned with the individual criminal accountability for crimes committed in the Occupied Palestinian Territory. The outcome of the matter as referred to the ICC by Palestine is yet to be decided by the Pre-Trial Chamber of the ICC.

Chris Gevers stressed that the criminalisation of apartheid as a crime against humanity has been introduced thanks to African states that fought for the inclusion of apartheid firstly in the Convention on the Non-Applicability of Statutory Limitations to War Crimes and Crimes Against Humanity, and then were instrumental for the adoption of the Apartheid Convention. For Chris Gevers, there is a high likelihood to domestically prosecute international crimes, in particular crimes against humanity committed during apartheid (i.e., killings, torture or enforced disappearance), through customary international law directly under section 232 of the Constitution. This possibility has been further confirmed by the Constitutional Court in Basson (2005) and Zimbabwe Docket Torture case (2014). In fact, as further stressed by Chris Gevers, when the government decided to withdraw from the ICC, it itself argued that the section 232 of the Constitute provides the independent basis for the prosecution of international crimes. In addressing the importance of prosecuting the acts committed during apartheid as international crimes, Chris Gevers suggested several reasons. Firstly, it would  address “historical questions and (to) avoid denialism”; secondly, crimes against humanity have “evolved and have been systemic” and therefore, they capture the very essence of crimes committed during apartheid, and thirdly, to prevent the procedural bars to the prosecution of these crimes and “use international criminal law to make sure it’s never too late to prosecute these crimes”. It was his suggestion that South Africa should ratify the Apartheid Convention for two important reasons; firstly, as a better way to target systemic crimes and create a broader conception and understanding of justice, and secondly, to recognize the efforts of newly independent African  states and the transnational solidarity outside the role of the West.

The politics and political costs of not ratifying the Apartheid Convention and also of not engaging with apartheid as a crime against humanity in the post-1994 era were addressed by Dr Mbete. She began by specifically addressing comments made by former President De Klerk that apartheid was not a crime against humanity which in her opinion “reflected a view of many white South Africans that the declaration of apartheid as a crime against humanity was somehow unjust and was based on the activism of not quite legitimate members of the United Nations.” Dr Mbete spoke on how the newly independent African states advocated for the adoption of Apartheid Convention “despite the criticisms and obstacles that were placed by the western European states and the United States, and they succeeded despite those obstacles”. It is Dr Mbete’s opinion that “President De Klerk’s remarks and some of the commentary of those who supported him” reinforce the idea that “because Africans and Asians signed the convention”, in international relations and international law, there are “some states [that] are more legitimate than others…”.

The failure of South Africa to recognize the apartheid as a crime against humanity “has meant that the manifestations of apartheid continue even now 26 years after the end of formal apartheid”. In addressing why apartheid as a crime against humanity has never been a part of public discourse, Dr Mbete highlighted that the final South African Constitution of 1996 does not make any specific reference to apartheid, colonialism or imperialism. Dr Mbete pointed out that although the reference to apartheid was made in the Interim Constitution of 1993, the subsequent 1996 Constitution only makes a mention of “the injustices of the past”. Dr Mbete suggests that the lack of explanation of what that injustice of the past really was and how it manifested itself was one of the reasons why the gravity of apartheid within the public discourse after ’94 was not acknowledged. According to Dr Mbete, the non-implementation of the recommendations from the Truth and Reconciliation Commission (TRC) was the other reason for failing to frame apartheid as a crime against humanity. Recommendations such as “financial reparations…prosecuting perpetrators who had not asked for amnesty and who didn’t appear in front of the TRC, restoring dignity and trying to equalize the very unequal playing field of South African society” were “ignored by an ANC government.” In this regard, Dr Mbete explained that post-democratic South Africa produced a “culture of impunity” where apartheid crimes have been “glossed over”, and which “created conditions for perpetrators to get away with it”.

The FHR’s webinar series is part of a broader campaign to address the crisis in morality and impunity in South Africa. This is built on the many injustices which have not been addressed or redressed by South Africa’s democratic government, despite over 25 years since apartheid. The FHR has created a new website dedicated to documenting and monitoring these cases and the ongoing efforts to reach justice for apartheid’s victims and survivors.

For more information on the FHR’s Programme on the Unfinished Business of the TRC, consult our website or contact us at TRCunfinished@fhr.org.za.

Chido Muzanenhamo is a junior research consultant at the Foundation for Human Rights and a PhD candidate in the South African Research Chair of Spatial Analysis and City Planning at the University of the Witwatersrand. Chido has a Master’s in Development Studies from the University of the Witwatersrand. Her Master’s research report entitled: ‘Space, Agency and Informality: A case study of Musina’s food vendors and foreign currency dealers’ was awarded First Prize for a Master’s research report in the School of Social Sciences.

The recording (webinar 3) can also be accessed below:

To learn more about webinar 1 and access the recording form webinar 1 consult: https://unfinishedtrc.co.za/fhrs-new-webinar-series-justice-delayed-is-justice-denied/

To learn more about webinar 2 and access the recording form webinar 2 consult: